Generac Awards Evapar at the Yearly Conference in Orlando, Florida

EVAPAR attended the Generac Power Systems Yearly Conference in Orlando, Florida in January 2018. The EVAPAR team captured two major awards at the conference of 34 Industrial Distributors, along with being recognized with hitting a sales milestone this past year. EVAPAR was named the Top Service Distributor in the entire country for 2017. This award is based on several factors comprised of the Service and Parts aspects of the business. Secondly, EVAPAR was awarded with the Top Market Share Award for having the best market share percentage in their territory compared to the entire country this past year. Generac Power Systems has a well-established outstanding group of Industrial Distributors covering the United States, claiming both of these awards was a great way to cap off a very successful 2017. 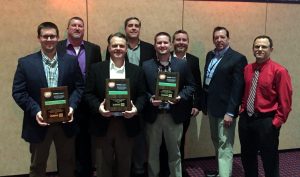