After a few months of work, EVAPAR is now the first FPT distributor in the states to achieve ECU programming level status. EVAPAR has been approved by Italy and has access to the new RSS remote services system to re-flash updates into the engine mounted computers. This adds a new dimension to EVAPAR’s engine service ability with FPT and the CNH dealer network that is now under development. 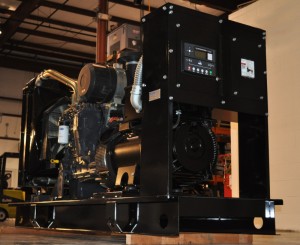 Evapar has been diligently working to develop our own product line that includes engine driven power units as well as our own Evapar Generator line. The Engine power units have been in production for a few months now and have been performing very well for us. Phase two of this project is developing Evapar’s own branded generator line.

The first part of that process is now completed and units from 50 to 80 KW will go into production at our Evansville location in July. This has been a long process of design and testing. The next step in the process in the 100 to 200 KW range that is ready to prototype and should go into production by third quarter this year. These packages will utilize our FPT engine line and the Marelli generators. This product has been developed completely in house by our own design committee. Special thanks to all of those folks for their input and ideas as we have worked to develop this line including Dave Dazey, Jason States, Nathan Dazey, Nicole Tanner and Dan Baldwin. Assembly and testing were completed by Tommy Atkinson, David Burke and Jason States. Generator sales staff will receive information on the new packages soon. Be prepared for big things from this line.

Speaking of the design work one of our team completed a major accomplishment yesterday. Evapar’s own CAD Technician Nicole Tanner achieved her CSWA solid works certification. She scored a 225 out of a possible 240. This is a three part exam taking part over several months of testing and training. Solid work rated her performance “VERY STRONG”. This certification adds credibility to Evapar’s designs and drawings moving forward as well as monetary savings for future software upgrades and class fees. Congratulations to Nicole on this accomplishment.

Here in soccerstars,You’ll find ostripes of adidas and the famous Puma ‘formstrip’ to call however a few, and all at low costs.
Kitbag is the home for football on-line – Your golf equipmenthave positive-honed their expertise and are football kit legends in the case of helping prospects get the service they want. Get the latest international soccer kits from England, Spain, Germany, Italy, Brazil, Argentina, France, Holland, Portugal and lots extra.
Rolex Wall Clock Advertising page:
Most fashionable and stylish looking rolex duplicate are is vitally necessary that you don’t force it counter clockwise. Setting the Time: Whereas the crown is in place four turn the dial clockwise (away from your body) till the fingers have reached the proper place. Unfollow rolex wall clocks to stop getting updates in your Facebook feed. On the market is 1 of these stunning and really rare Sellers Showroom Show Wall Clocks, representing the well-known Rolex watch.